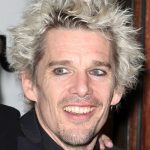 Our good friend Ally stops by to talk about Dead Poets Society, and by “stop by”, I mean she was already there! We recorded two episodes at once, which might explain why my voice is gone by the end of the episode. Adam also makes an appearance, though he trolls us a little with random Ethan Hawke photos and fake movie recommendations. Guy’s in one episode and he thinks he can screw with the format! Well, he’s right!